In October 2014, I successfully defended my Ph.D. thesis entitled Synthesis and intercalation of epitaxial graphene on iridium. Its extended abstract is given here and the complete thesis (pdf, ~23 MB) can be downloaded by clicking on the front cover image below. 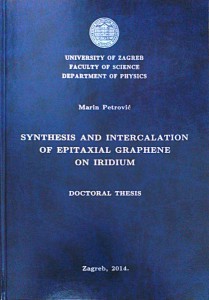 Epitaxial graphene on iridium (111) surface is considered to be one of the best systems for studying intrinsic properties of graphene due to the weak interaction with the substrate which is predominantly of the van der Waals character. In epitaxial systems, graphene’s properties can be modified or some new ones can be induced by the processes of intercalation of various atoms or molecules in between the graphene and the substrate. Therefore, a detailed understanding of the formation of such hybrid systems, from graphene synthesis to its intercalation, is crucial for their complete understanding.

In this thesis, results relevant for the growth and intercalation of epitaxial graphene synthesized on Ir(111) are presented. By utilizing well-established procedures for graphene synthesis, samples with various graphene coverages are prepared in order to characterize the growth of graphene in detail. Different species (specifically, Cs, Li, Eu and O) are also deposited on such samples which results in the formation of new, hybrid (and most often intercalated) systems whose properties depend on the exact preparation parameters. In order to characterize the morphology, low energy electron microscopy (LEEM) and scanning tunneling microscopy (STM) are used while the electronic structure is investigated by means of angle-resolved photoemission spectroscopy (ARPES) and two-photon photoemission spectroscopy (2PPE). The growth of graphene is characterized on a microscopic level, focusing on small graphene islands and their interaction with iridium. For a complete graphene monolayer, a network of graphene wrinkles is studied. It is found that such network exhibits ordering on the micrometer scales dictated by the substrate. Occupied and unoccupied electronic structure in the vicinity of the Brillouin zone center is investigated via spectroscopic techniques establishing basic relations between the states located below and above the Fermi level. From the aspect of intercalation, Cs deposition on well defined graphene layer is studied and emerging spectroscopic and morphological features are characterized. By this, a novel mechanism of intercalation and the corresponding dynamics behind it are revealed. A competition between Coulomb and van der Waals interactions turns out to be crucial in such epitaxial systems. In addition, intercalation of Li, Eu and O are characterized with special emphasis on the electronic structure at the K point of the Brillouin zone which gives new insight on the influence of various intercalated layers on the surface states of iridium.

We use cookies on our website to give you the most relevant experience by remembering your preferences and repeat visits. By clicking “Accept All”, you consent to the use of ALL the cookies. However, you may visit "Cookie Settings" to provide a controlled consent.
Cookie SettingsAccept All
Manage consent

This website uses cookies to improve your experience while you navigate through the website. Out of these, the cookies that are categorized as necessary are stored on your browser as they are essential for the working of basic functionalities of the website. We also use third-party cookies that help us analyze and understand how you use this website. These cookies will be stored in your browser only with your consent. You also have the option to opt-out of these cookies. But opting out of some of these cookies may affect your browsing experience.
Necessary Always Enabled
Necessary cookies are absolutely essential for the website to function properly. This category only includes cookies that ensures basic functionalities and security features of the website. These cookies do not store any personal information.
Non-necessary
Any cookies that may not be particularly necessary for the website to function and is used specifically to collect user personal data via analytics, ads, other embedded contents are termed as non-necessary cookies. It is mandatory to procure user consent prior to running these cookies on your website.
SAVE & ACCEPT
Skip to content